Castine, Maine is one of the oldest towns in New England, predating the Plymouth Colony by seven years. Few places in New England can boast a more tumultuous or varied history than Castine. Despite its varied past, Castine is currently home to the Maine Maritime Academy, a four-year institution that graduates officers and engineers for the United States Merchant Marine. It is in a prime location for a memorable vacation. Read More

Discover an oasis of fine food and lodging in a storied village by the sea. This award winning inn offers gracious hospitality, elegant accommodations, and fine dining.

Searching of a Castine bed & breakfast? Look no further than the Castine Inn. They offer an ageless historical theme and have a beautiful garden.

Known as being one of the original settlements by the French in the new country, Castine, Maine is an area rich in history and tradition. This small coastal community, which encompasses nearly 7.9 square miles, can be found approximately one hour from Bangor on a small peninsula in the East Penobscot Bay Region of Maine.

The quaint village has over one hundred historic markers, which point to the 18th century architecture, which can be found through out the town. Tourists who are interested in early American history are delighted with major landmarks found here such as Fort George which was built in 1779 by the British and Fort Madison which was build in 1811.

The year-round population is only around 1,300 – 700 0f which are students attending the Maine Maritime Academy. However, during the summer months, there are numerous visitors and summertime residents, which causes the population to nearly double. Noted for its history, and friendly atmosphere, Castine, Maine is a favorite vacation destination for many. 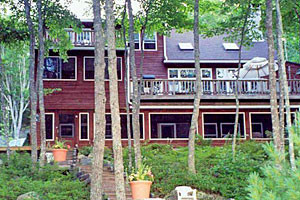 The town of Castine is well known as a college town for the Maine Maritime Academy but has a very small population of around 1,500.

The Castine Farmers' Market is a new market in the area welcoming local vendors and farmers to register for a booth to sell their goods.

The Wilson House in Castine, Maine is dedicated to the geological research performed by Dr. John Howard Wilson.